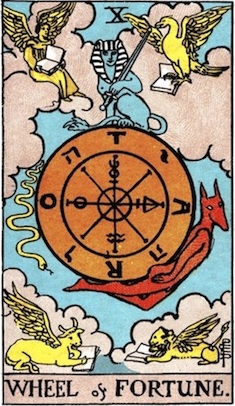 In tarot, the Wheel of Fortune card (glance to your left) is a reminder that we’re all bound to a wheel that never stops turning. On top today, bereft tomorrow, and the day after tomorrow… who knows? Change is the only constant.

The wheel has spun wildly for me all year. In some respects, it’s been one of the worst years I can recall. The whole world has seemed deranged at times, but there have also been some hard-to-bear personal catastrophes. Yet, I also finished my BA Honours (Sociology) halfway through the year with a killer grade that reflected hard work and the support of an awesome advisor and lecturers. Towards the end of the year, I was also accepted into JCU’s PhD program starting (very soon) in 2019. What’s more, I was awarded a really generous scholarship.

Oddly, given some of the stuff that’s been going on, as I look back on the year, it’s the lack of writing progress that stings. I keep trying to establish a routine, improve my skills, level up—and I keep sacrificing writing to my other priorities and remaining, frustratingly, fairly static in the skills department. And, apart from a close call or two early in the year, no sales!

As I embark on my PhD research, it seems clear I’m going to have to master the whole competing priorities thing once and for all if my writing is to stand a chance. Based on history, if I were my writing right now, I’d be feeling a wee bit nervous.

Still, positive thinking types are fond of telling us that giving up is the only failure, so I’m thinking not giving up is step one. So that’s the first thing on my 2019 to-do list, and I’ve ticked it off.

That done, I watched a webinar on writerly goal setting presented by Joanna Penn on her The Creative Penn YouTube channel. I also read around a bit, mind-mapped, and did some thinking.

For many years, I’ve focused on short stories because I suspected they were friendlier to a time-poor schedule. Also, I’ve felt I needed to crack short fiction before really trying a novel. I begin to suspect neither of those things is true—and if I don’t make a serious effort to produce a novel soon, I never will, and that would be a sizable deathbed regret. Memento mori, and all that. So, I decided on a concrete goal: