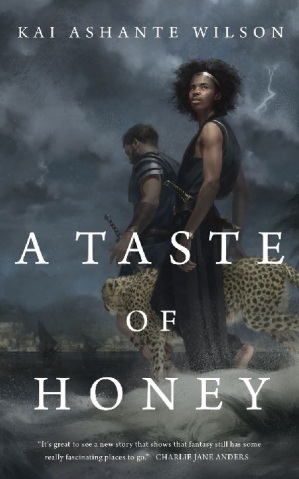 Kai Ashante Wilson’s The Devil in America was nominated for the Nebula award, and his Tor.com novella Sorcerer of the Wildeeps picked up the 2016 Crawford award. You’d expect his newest novella from Tor.com to be pretty marvellous, and it is.

At first glance, A Taste of Honey is a fantasy story in which a young nobleman of Olurum finds first love with a Dalucan soldier, and pursues that love despite religions proscriptions against homosexuality and the violent disapproval of his family. Once the gods put in a brief appearance, and turn out to be transhumans rather than divinities, the genre shifts slightly to science fiction. And the story unfolds into a beautifully told examination of how our choices shape our lives.

The intense and risky love affair between Aqib and the foreign soldier Lucrio is skillfully handled. Tension arises from the Dalucan’s inability to fully understand the need for secrecy (coming, as he does, from a freer society) and from Aqib’s feverish, giddy surrender to first love leading him to take risks that he otherwise mightn’t. As the narrative shifts in time between younger and older Aqib, other kinds of love enter his life, and new perspectives on the romance emerge.

Wilson’s prose is lovely. His worldbuilding is relatively simple, but a novella doesn’t require the vast, sprawling world that a modern fantasy mega-tome might, and what is there is appealing. For me, the gods were a highlight—human but wonderfully strange and a little perilous in their casual power. The subplot concerning Aqib’s wife, the Blessed Femysade, makes plain how even the slightest touch of very great power can disrupt a life simply by opening up new choices.

The ending is surprising and satisfying, and you can’t ask much more than that. Highly recommended.