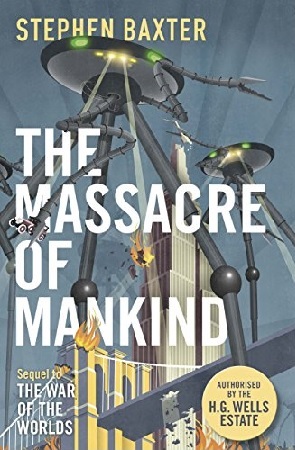 The iconic tripods rampaging across the cover tell you fairly succinctly that The Massacre of Mankind by Stephen Baxter is an authorised sequel to H.G. Wells’s classic The War of the Worlds. I’m normally indifferent to new authors revisiting old wells (pardon the pun). Moreover, The War of the Worlds is among the first science fiction novels I read and it so thoroughly blew my mind that I re-read it until my copy disintegrated. I expected to be disappointed by The Massacre of Mankind and I doubt that I’d have bought without Stephen Baxter’s name on the cover. As it turned out, I enjoyed Baxter’s sequel.

Briefly, the novel reports the events of the second Martian invasion of Earth thirteen years after the first. The narrator of Wells’s novel is reduced to a minor character named Oliver Jenkins, while the narrator of The Massacre of Mankind is his sister-in-law, the journalist Julie Elphinstone. When the Martians return, they have adapted their biology and technology based on their first experience with Earth and this time they have their sights set on the whole planet.

Baxter does an incredible job of building the post-Martian world as an alternate 1920s inflected by humanity’s first encounter with aliens and their efforts to adapt abandoned Martian technology. There are fun cultural details such as Charlie Chaplin’s being famous for his portrayal of a character based on Wells’s Artilleryman. And there are grim historical alterations such as World War I becoming Germany’s long solo war against Russia using Martian technology acquired from their increasingly militaristic allies, the British.

If the novel has a flaw, it would have to be pacing. The early part of the book moves quite slowly as it sets everything up. An exacerbating issue throughout the novel is its nature as journalistic memoir written after the fact by Miss Elphinstone so that even impactful scenes from which she’s absent are delivered as dry reportage.

But once the Martians put in appearance, the book becomes gripping. They’re portrayed as cunning and well-prepared conquerers and some of the set piece scenes of Martian attacks on cities around the world are marvellous—particularly, for me, Constantinople and Melbourne.

I suspect the ending will divide people, but I found it acceptable. In some respects, the ending isn’t the point. The point was to revisit for the twenty-first century Well’s critique of Imperialism—that just because you believe there’s a ladder of creation it doesn’t mean you’re standing on the top rung—and he does that skillfully.

In short, well worth a read.